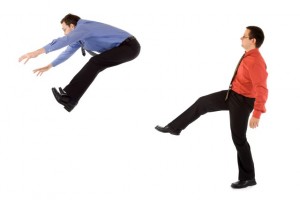 Phantom MLS websites like Zillow, Trulia and Realtor.com are starting to feel the sting of rejection from real MLS organizations in the Nashville and Pittsburgh metro areas. In Nashville, the MLS has decided to limit the amount of detail available to aggregators like Zillow. The idea is to give brokers more control over their own listings and motivate Zillow visitors to click through to the broker’s own sites, rather than stick around and browse.

“Changes include a four-photo limit; the elimination of several data fields; listing descriptions will be restricted to 150 characters; and public portals will be required to include a link to the listing detail page on the listing broker’s website.”

Essentially, they feel like the big portal sites should return the favor of receiving free information by pointing potential customers back toward individual agents. Unfortunately for Zillow, this pretty much contradicts their whole business model, which is to charge brokers a fee for advertising on the site. Not surprisingly, they’re not thrilled with these changes, and have been vocal about their opinion.

Meanwhile, in Pittsburgh, one of the area’s largest brokerages, Northwood Realty, has pulled more than 2700 of its listings from Zillow, while continuing to allow feeds going to Trulia and Realtor.com. The problem, they say, is that Zillow’s Zestimates, which appears even on listings of homes currently listed, have a tendency to be wildly inaccurate, which creates confusion for consumers and tension for brokers and owners.

“While we embrace technology and promote it as a tool for our clients, it has become apparent that the level of inaccuracy on Zillow’s website is misleading, inaccurate and outdated. Because they collect data from many resources, there are instances when listings appear to be available when they have, in fact, been sold and when information such as room count and size is incorrect.” said Northwood Realty’s CEO and President, Tom Hosack.

As search engine share gets increasingly competitive, brokerages are realizing that they’re being pushed out of their own markets by large portals like Zillow and Trulia. Instead of ranking at the top of search engines in their respective markets, many brokerages, and their agents, are having to pay for ad space from the big 3 in order to generate new leads. It will be interesting to see how these stories play out. As more and more brokerages and MLS organizations realize that they have the power to cut off the feeds to the big 3, there could be some big shake-ups