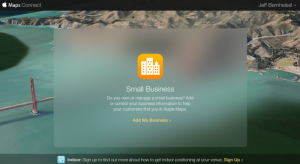 In mid 2012, Apple made a fairly controversial move by dropping Google as their mapping provider in favor of their own mapping platform using data from Yelp!.

Yelp profiles – before they were good for SEO, user reviews, etc.

But NOW, here’s an even more compelling reason to fill out a business profile on Yelp:

In Apple’s upcoming iOS6 update, they’ve ditched Google maps (and their “places” as points on the map) and chosen to use the Yelp API on their own map platform.

Basically, businesses with a Yelp profile show up in the search, with priority (the initial display point) given to those that have more reviews. The cool part is when you click on the business, the profile pictures are displayed as a rotating slideshow with your business contact info (see screenshots).

So, to best take advantage of this – fill out a complete profile with ALL contact info, put up some decent photos (beginning with a company logo like I did for M Realty) and get some reviews so it prioritizes you in front of the competition.

Nothing has really changed since then… until earlier this week. On Wednesday, Apple quietly rolled out “Maps Connect” which allows you to easily add and/or claim and edit business listings directly to their mapping platform, circumventing the need to setup business profiles on Yelp!.

This is great news for those who despise Yelp and it’s “allegedly” shady sales tactics revolving around the filtering of reviews, ad sales bribery, etc. as you’re no longer forced into using their platform to list your business on the billions of iPhones roaming the streets at any given time.

Now, don’t get me wrong here… I’m definitely not saying you shouldn’t setup a Yelp! business profile. In fact I still recommend it, as Apple maps and the new Maps Connect is still pulling and prioritizing business listings based on the Yelp data (images, reviews, etc).

But, if you want to skip using Yelp! or you’re looking for a quick way to add/edit your current business listing (including address, phone, hours and even social media links), I’d check out the new platform. It’s simple, and takes just a few minutes to go through the whole process.